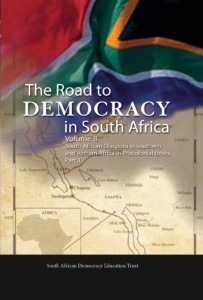 New Release: The Road to Democracy in South Africa, 8.1

The Road to Democracy in South Africa, Volume 8, Part 1: South African Diaspora in southern and eastern Africa in Precolonial times

This book provides a regional perspective of the South African diaspora’s involvement in the history of southern and eastern Africa, specifically in the countries known today as Tanzania, Malawi, Zambia, Zimbabwe and Mozambique. It positions the 19th century migrations and interaction with other people in the region within the broader regional demographic, political and economic dynamics of the nineteenth century. Accordingly, the book reinforces the assertion that the migrations are better understood as a regional or continental phenomenon rather than as an external intrusion into the societies concerned. The regional perspective is explained by making reference to the dynamic and changing nature of all the societies in southern and eastern Africa during the nineteenth century. It is argued that the migrations were an integral part of those dynamics, even though the Ndebele, Ngoni and ‘Shangaan’ originally came from an area which is now called KwaZulu-Natal in the Republic of South Africa. This is, however, not to discount or belittle the phenomenal character of the movement in question, especially as defined by the coverage of a vast territory which extends from southern to eastern Africa in just over one generation.

New Release: There, but for the Grace of God

New Release: The Collected Works of J. A. Atanda