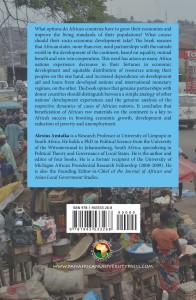 What options do African countries have to grow their economies and improve the living standards of their populations? What course should their socio-economic development take? The book reasons that African states, more than ever, need partnerships with the outside world in the development of the continent, based on equality, mutual benefit and win-win cooperation. This need has arisen as many Africa nations experience decreases in their fortunes in economic development and equitable distribution of resources among their peoples on the one hand, and increased dependence on development aid and loans from developed nations and international monetary regimes, on the other. The book opines that genuine partnerships with donor countries should distinguish between a simple analogy of other nations’ development experiences and the genuine analysis of the respective dynamics of cases of African nations. It concludes that beneficiation of African raw materials on the continent is a key to Africa’s success in boosting economic growth, development and reduction of poverty and unemployment.

Alexius Amtaika is a Research Professor at University of Limpopo in South Africa. He holds a PhD in Political Science from the University of the Witwatersrand in Johannesburg, South Africa, specializing in Political Theory and Governance of Local States. He is the author and editor of four books. He is a former recipient of the University of Michigan African Presidential Research Fellowship (2008-2009). He is also the founding Editor-in-Chief of the Journal of African and Asian Local Government Studies.