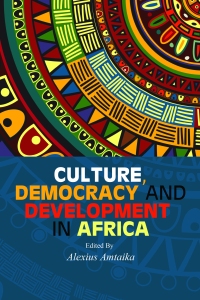 Culture, Democracy, and Development of in Africa

Conceptually and programmatically, there is no clear connection between the concepts of democracy, culture and development. However, the influences of Western European countries in the implementation of democratic ideals and development models, plans and programs on the African continent, has created vast fields of play between them, in so doing informing and blending into one another. It is in the context of this that this book comes to the fore. First, to assess the question of whether development undergirds democracy or promote democratic impulses. Second, to scrutinize the casual link between democracy and development, which is taken for granted in our times. Third and finally, to assess the claims of whether culture is dynamic and fluid as it is in the era of increased global flows or as an entity to be compartmentalized or understood in fixed terms. The book takes the concept of culture as its point of departure to explore political, economic and social phenomena, on the grounds that, whenever one defines the concept of development or democracy, the notion of culture assumes a deterministic and influential role in it, and that the precepts of democracy or models of development are usually marked by tangible signs or sets of ideas, visions and claims, which ultimately determine the contours of culture. It is on these grounds that, not only does each of these three concepts supports or denotes group or institutional practices, but also contains conceptual claims with ideological power.

Alexius Amtaika is a Research Professor at University of Limpopo in South Africa. He holds a PhD in Political Science from the University of the Witwatersrand in Johannesburg, South Africa, specializing in Political Theory and Governance of Local States. He is the author and editor of four books. He is a former recipient of the University of Michigan African Presidential Research Fellowship (2008-2009). He is also the founding Editor-in-Chief of the Journal of African and Asian Local Government Studies.