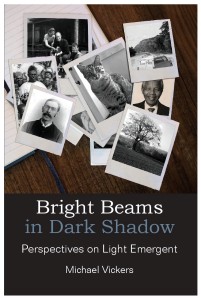 Starting as a simple compilation of selected lifetime writings, Bright Beams in Dark Shadow evolves into a personal testimony with a thrusting thematic thread; that of the ongoing battle of an ever-challenging Light, with an entrenched and dominant Darkness. Underlying emphasis is given to the fast-accelerating shift in Life Principles and Life Values from our planet’s world of the parochial, into a modern world of emergent universals of inclusion and engagement. The profound and transformative role of cybernetics, recognised and understood by few, emerges as the base platform from which all else in our unfolding future, follows. It is hoped this lengthy selection of odes, articles, critiques and commentaries will provide for the reader a powerful stimulant to a wide range of ponderings, queries and challenges at every level and depth; and indeed on new, penetrating and provocative Perspectives on Light Emergent.

Professor Michael Vickers — Taught Political Science at the University of Ife (now Obafemi Awolowo University) Nigeria; taught and conducted research at universities in America, Canada, and the United Kingdom. Recipient of the Distinguished Academic Award (2012) from the University of Ibadan, he is author of several acclaimed books, including Structure and Conflict in Nigeria, 1960-65 (1973) with Ken Post, Ethnicity and Sub-Nationalism in Nigeria (2000), and most recently A Nation Betrayed—Nigeria and the 1957 Minorities Commission (2010), Phantom Ship (2013), On Wings of Light—Reflections on Cybernetics, Africa and the Wider World (2015). He holds a doctorate in Political Science and West African Studies from the University of Birmingham, UK, and is Emeritus Director of Parliamentary and Public Affairs, The Hillfield Agency (UK).