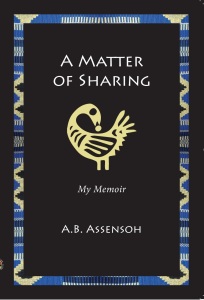 New Release: A Matter of Sharing

A Matter of Sharing: My Memoir

A Matter of Sharing is a memoir of Ghana-born A.B. Assensoh, who has lived, studied, and worked in the United Kingdom, Nigeria, and Liberia, where he served in editorial capacities. From Sweden, where he studied at the University of Stockholm and also served as Editor of African Features Service in Scandinavia, he moved to the United States in the mid-1970s, first to serve as a Scholar-in-Residence at Lincoln University in Pennsylvania as well as University of Pennsylvania, and he has lived there ever since. His memoir serves as his recollections of events that bring happiness, mixed feelings and, sometimes, sorrow. Apart from sharing anecdotes of some of the events in West Africa of London, this is the first time that he has committed many of the details.

New Release: Africa and Its Diaspora