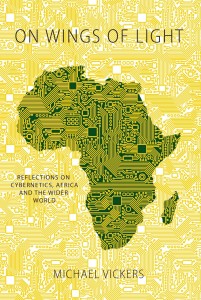 On Wings of Light: Reflections on Cybernetics, Africa & the Wider World
By Professor Michael Vickers

On Wings of Light: Reflections on Cybernetics, Africa & the Wider World is concerned mainly with core concepts critical to understanding and engagement of modern life. It draws on the large experience of history and the present, with Africa the original home of Emergent Man, the starting point. But its principal focus is on the “Horizon Future.” Darkness, reinforced by Vertical Structures, has been the dominant context in which human life has been conducted since the advent of Social Groups, some 10,000 years ago. And Darkness is maintained by a Universal Ethic defined by determining values of “division/exclusion/ acquisition.” It is these values that have shaped and consolidated beliefs/ attitudes/ behaviour and institutions to the present day.

However, while the world’s folk have been taught and have lived within this context of Darkness, there has been always rooted within folk, Light; this defined by values of “realisation/ actuation/ inclusion.” Many leaders of thought/ belief over the millennia have sought fully to actuate Light in life; to challenge dominant Darkness. Their weapons/ instruments have been mainly Faith-based. As these have been/ are at root divisive/ exclusive amongst the world’s multi-ethnic/ multi-cultural/ multi-National peoples, Darkness has retained an easy dominance. …Until recently.

The fast-accelerating engagement of modern electronics and communications has opened wide new doors to challenge/ diminish Darkness and to actuate/ increase Light. The key to this fundamental shift in the age-old Dualistic Battle between Darkness and Light, has been emergence at last of a Universal Instrument, one that is founded upon a material-cognitive, rather than a Faith-rooted base. This instrument is what today we call Cybernetics—the tripartite operation of “navigation/ networking/ feedback” in relation to applied inter-connected systems of electronics and communications. While there has been quiet cybernetic advance over the past 60 years and more; it is in the past 20 years that the accelerated force of its transformative impact has been felt. The effect? Reduction of Darkness, and Enhancement of Light in the lives of us all as we are progressively moved out from the confines and rigidity of the parochial, and onto actuation/ inclusion in relation to basic issues folk share worldwide. Acceleration increases.

In terms of the Horizon Future envisaged, and with the West/ Developed world in increasing decline, Africa holds the pre-eminent position. Vast Lands/ Resources/ Populations ensure its future ascendancy in a world of fast growing numbers of RDTs (Resource Dependent Territories). Most important however in generating consistent thrust into the future is the traditional Africa Root Ethic of Inclusion/ Light.

Few have noticed the Ascent of Africa. And in recent decades the pace has greatly increased. In these modern developments, cybernetics is playing a lead instrumental role. It is a role that will duly bring Africa and its peoples to first-amongst-equals in a world where Darkness has been progressively pushed to the margins; a world where Actuation and Inclusion are moving fast-forward in the emergent Ethical context of Light.

New Release: The Collected Works of J. A. Atanda