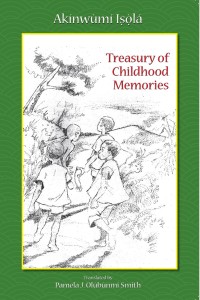 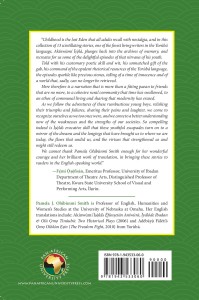 About Treasury of Childhood Memories:

“Childhood is the lost Eden that all adults recall with nostalgia, and in this collection of 13 scintillating stories, one of the finest living writers in the Yoruba language, Akinwumi Isola, plunges back into the archives of memory, and recreates for us some of the delightful episodes of that nirvana of his youth.

“Told with his customary poetic skill and wit, his unmatched gift of the gab, his command of the opulent rhetorical resources of the Yorùbá language, the episodes sparkle like precious stones, telling of a time of innocence and of a world that, sadly, can no longer be retrieved.

“Here therefore is a narration that is more than a fitting paean to friends that are no more, to a cohesive rural community that time has swallowed, to an ethos of communal living and sharing that modernity has erased. As we follow the adventures of these rumbustious young boys, relishing their triumphs and failures, sharing their pains and laughter, we come to recognize ourselves as we too once were, and we come to a better understanding now of the weaknesses and the strengths of our societies. So compelling indeed is Isola’s evocative skill that these youthful escapades turn on to a mirror of the dreams and the longings that have brought us to where we are today, the flaws that undid us, and the virtues that strengthened us and might still redeem us.

“We cannot thank Pamela Olúbùnmi Smith enough for her wonderful courage and her brilliant work of translation, in bringing these stories to readers in the English-speaking world.”